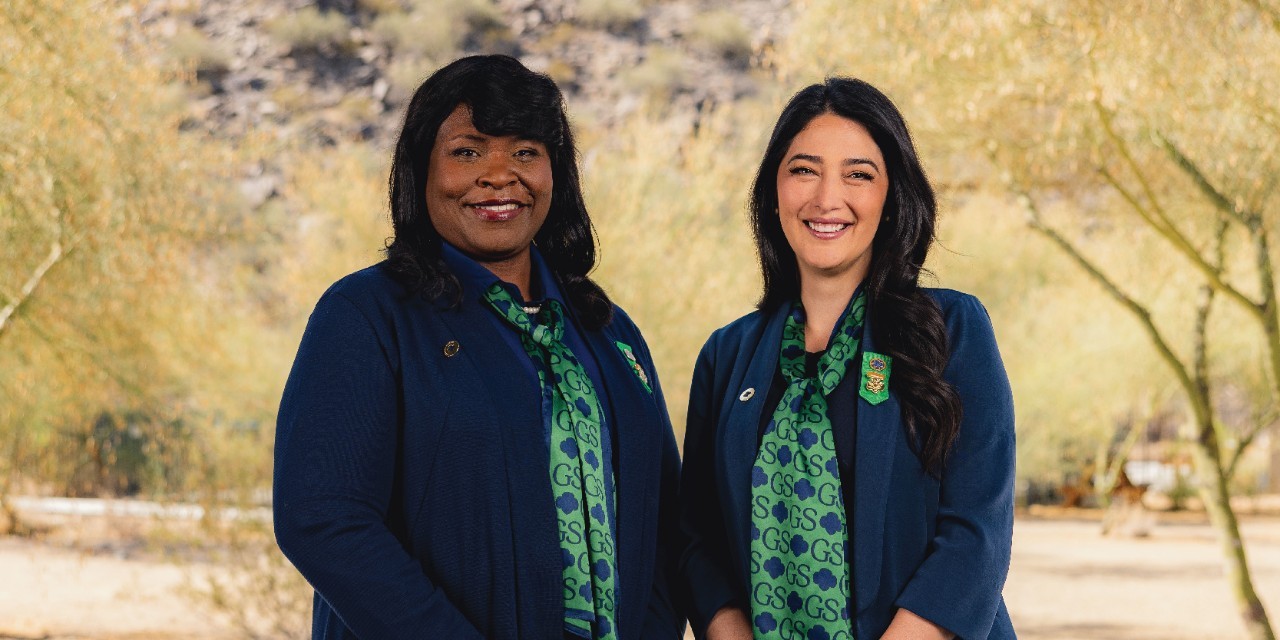 (PHOENIX – July 29, 2022) – Girl Scouts–Arizona Cactus-Pine Council (GSACPC) is pleased to announce the appointments of Mary Mitchell and Christina Spicer as co-chief executive officers. In their roles, Mitchell and Spicer will work together to maintain, establish, and grow key partnerships within the government and community; continue to make diversity, equity, inclusion, and racial justice an organizational priority; and provide strategy and vision to ensure GSACPC’s staff, 6,500 adult volunteers and 11,000 girls grades K-12 in more than 90 communities across central and northern Arizona are supported and empowered to be unapologetically themselves as they discover their strengths and rise to meet new challenges while helping build a better world.

“Mary and Christina are proven leaders who embody the tenets of our culture and mission, with rich track records of successful community-minded leadership. We have full confidence in their abilities to lead the organization forward as their deep knowledge and quality decision making over the last 12 months in interim roles have been exceptional,” says GSACPC Board Chair Lupe Camargo. “The idea of shared leadership is not new, yet not often seen in organizations. Our board believes these are the right two people to deliver creativity and innovation, while preserving and enhancing the council’s culture. Mary and Christina’s strengths as leaders complement each other and work well together.”

Arizona native Mitchell has been a member of the GSACPC team since 1998, most recently serving as interim Co-CEO alongside Spicer since 2021. Prior, Mitchell served as a deputy director as well as the senior advisor and co-lead for the organization’s work related to diversity, equity, and inclusion. Active in the community in addition to her work with GSACPC, Mitchell is a board member for Arizona Legal Women and Youth Services, a nonprofit community legal center focused on balancing the scales of justice for Arizona’s most vulnerable youth in the areas of human-trafficking, immigration, homelessness, and abuse. She is a Virginia G. Piper Charitable Trust Fellow, as well as a graduate of Valley Leadership, Class 26 and a recipient of the 2020 YWCA Tribute to Leadership Award and 2020 Phoenix Mercury We Believe in Women Award. Mitchell earned her bachelor’s degree from Governors State University in Chicago and has most recently completed Executive MBA coursework at Grand Canyon University.

“When I joined GSACPC in 1998, I made it my mission to do all that I could to create enhanced opportunities to make Girl Scouting more accessible for all girls since I did not participate while growing up in rural Arizona in the 1970s. As a youth, I did not see girls or volunteers that reflected my lived experience or racial background, and unfortunately, nor did I experience an invitation or opportunity to join. Looking back, I wonder what might have been different if I had the chance to explore my passions, leadership, and interests through an incredible experience like Girl Scouting,” says Mitchell. “I’m overjoyed that I have the opportunity to help lead us into a future that nurtures and grows our focus on diversity, equity, inclusion and racial justice. For the past 24 years, there have been incredible moments of joy in witnessing a girl use her voice or take action, reflecting her feeling a true sense of belonging and sisterhood. I want all girls in our community to know what that feels like. These moments are indicative of our organizational story and reflective of our mission, to help build girls of courage, confidence, and character.”

Spicer has been a member of the GSACPC team since 2014. Prior to working as interim Co-CEO in partnership with Mitchell in 2021, Spicer also served as deputy director of the organization and as senior associate of fund development. A tireless leader in the nonprofit sector since 2003, including roles at notMYkid and Teach For America, Spicer – a Valley Leadership Class 28 graduate – recently completed service on the Valley Leadership board and is a founding member/past president of Young Nonprofit Professionals Network. She currently serves Charter 100 as treasurer and volunteered on the Vista College Prep School board for three years and with the Hope For Future Foster Care Camp. In 2013, Spicer served as a Flinn Foundation Flinn-Brown cohort and in 2009 founded CAMEO, a women’s mentorship organization. In 2022, she was honored among the Phoenix Business Journal’s 40 Under 40. Spicer earned her bachelor’s degree and master’s degree from Arizona State University.

“Experiencing Girl Scouting for a year as a child - with my mother as my troop leader - helped shape my future. To see her in that leadership role as a fierce Latina, planted the seeds of determination that led me to become the first person in my family to attend and graduate from college as well as the inspiration to pursue a career in a field that allows me to empower others to lift themselves to new heights,” says Spicer. “During my time with the Girl Scouts since 2014, our team has worked together to grow the annual fund from $600,000 to $4 million; completed the Campaign for Girls capital campaign that resulted in the building of the Parsons Leadership Center for Girls and Women; led the Day of the Girl, which raised $1 million for GSACPC; and navigated through COVID-19. And we are only getting started. I am humbled to be part of this incredible movement that serves Arizona girls.”

Mitchell and Spicer take over the CEO role from Tamara Woodbury, who is retiring after leading the organization since 1993, though the Lifetime Girl Scout will continue in an emeritus role through September 30.

“I have great admiration for Tamara and all the amazing things she has done for Girl Scouts over the years. Under her transformational leadership, our council took on the largest capital campaigns and raised millions of dollars. We used some of those funds to turn the once worn and tattered Camp Sombrero into a statement about how we believe in girls and women and their leadership potential. The Bob and Renee Parsons Leadership Center for Girls and Women is the most incredible leadership and camping facility for girls and women in this country,” says Camargo. “In the true Girl Scout way, Tamara is leaving the council in better shape than when she found it and well-positioned for the future.”

“I have witnessed Tamara’s leadership for more than two decades. Her career in Girl Scouting spans 43 years with four Girl Scout Councils, yet almost 30 of those years were here with Arizona Cactus-Pine. Tamara is a leader in every sense of the word. She leads with vision, passion, and purpose and she truly believes that girls can change the world, if given the opportunity to do so. It made her the perfect person to be in leadership and in shared partnership with staff, volunteers, and community to create the conditions for all girls to be seen, valued, and to achieve whatever hopes and dreams they might envision both now and into the future,” says Mitchell. “Tamara spent the better portion of her career advocating for greater equity for girls and women. In 2001, on our council’s behalf, she received the largest grant given by Virginia Piper Charitable Trust at the time of $1 million. She was also named one of five, first-ever Piper Fellows.”

“To work with Tamara for the last eight years has been a privilege and I have great love and respect for her. She has shaped and changed the lives of so many girls and women in this community. In fact, over the course of her Girl Scout career in Arizona, we have served over 500,000 girls under her leadership, which is an incredible accomplishment. She was asked to serve on the city of Phoenix Youth Commission and the Phoenix Mayor’s Small Schools Task Force to be a leading advocate for Girl Scouting in our community. Her authentic passion and commitment to the movement is inspiring,” says Spicer. “She has the ability to see people’s gifts and talents and encourages them to make the world a better place. I have been able to call Tamara a teacher, mentor, and friend. It is an honor to carry the torch of the Girl Scout mission.”

In partnership with 6,500 adult volunteers, GSACPC serves over 11,000 girls grades K-12 in more than 90 communities across central and northern Arizona. Since 1936, GSACPC has helped girls develop leadership skills and tools for success in a rapidly changing environment. We know that given the opportunity, every girl can become a leader, act confidently on her values, and connect with her community. For more information, visit www.girlscoutsaz.org, like us on Facebook or follow us on Instagram .