All women are inspiring, and one thing is for sure, there are so many trailblazing women who have paved the way for us today that often go unrecognized! This month we chose to highlight some women people should know [more] about. Maybe you’ve heard of them, but for those who haven’t – you’ll be inspired by the things these women did. They are all true G.I.R.L.s, from taking risks, to standing up for what is right, they believed in themselves before anyone else and that is how they got things done!

Vera was born in Philadelphia with a dream as big as our galaxy. She wanted to become an astronomer, and by choosing this career path she knew she had to prove herself. Science was a male-dominated field, but Vera was up for the challenge. She applied for scholarships to several colleges as that was her only way in and she received one for Vassar College. She was very excited, so she went to her physics professor to tell him the news and his response was, “As long as you stay away from science, you should do okay.” Vera wasn’t discouraged, this only fueled her to reach her dream. Vera went on to pioneer work on galaxy rotation rates, she uncovered the discrepancy between predicted angular motion of galaxies and observed motion. She was described by other astronomers as a “guiding light” for those pursuing a career in astronomy.

Many of you may recognize this name, but you may not remember exactly why. Sandra Cisneros is a household name in classrooms throughout the United States for her novel The House on Mango Street. Sandra is a novelist, poet, short story writer, essayist, performer, and artist, who focuses her work on exploring the lives of the working-class. Sandra felt she did not see her home culture represented “with love,” in any films or written works, so she was inspired to write it into existence herself. The House on Mango Street has been translated into over twenty languages and sold over six million copies. Sandra is incredibly proud of her Mexican-American culture and her ability to speak both English and Spanish–this is something she shows through all her work and her role as a Latino community activist. Sandra has won many awards and was even honored with the National Medal of the Arts by President Obama in 2016.

Also known as The First Woman of Finance, Muriel Siebert was the first woman to own a seat on the New York Stock Exchange and was the first woman to head one of the NYSE’s member firms. At the same time, finance was a field that women wouldn’t dare enter – but Muriel decided to take that risk. Out of the first ten men she asked to sponsor her application, nine denied her, yet she persisted. Muriel was challenged several times before finally getting a seat on the New York Stock Exchange and eventually going on to become the most powerful woman in finance. Muriel was named the Superintendent of Banks for the State of New York which oversaw all the banks in the state, about $500 billion. During her tenure, not one bank failed. In 1994 Muriel was inducted into the National Women’s Hall of Fame.

During the time of the Women’s Suffrage Movement, Mary Ann Shadd Cary was a woman who was often overlooked. She vehemently fought for women’s right to vote and ultimately Black women’s right to vote. Mary Ann was an American-Canadian citizen who went on to become the first Black woman publisher in North America and the first woman publisher in Canada. She was an anti-slavery activist, journalist, publisher, teacher, and lawyer who started the newspaper The Provincial Freemen. Mary Ann was also the second African-American woman to earn a law degree in the United States. If there was a barrier to be broken at the time – Mary Ann Shadd Cary was there to shatter it.

Although Women’s History Month only lasts 31 days, we remember the women who came before us and those who are still here, who made and continue to make the world a better place, every day. Girl Scouts are change-makers, each of YOU inspire others and are out to break barriers, shatter ceilings, and write the rules of the future. 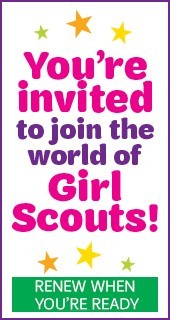