Support Her as she Stands Up for Change

Support Her as she Stands Up for Change

Across the country, young people standing up for their beliefs are making headlines, sparking national conversations, and in some cases even getting laws changed to reflect what they think is right.

If your girl is involved in these movements or has been vocal about some other issue, you might worry about her being seen as "disruptive" or too "opinionated," but it's important to recognize that it takes courage and character to speak out against the status quo—even if you don't agree with her views.

This call to push back against the problems in our society—to say, "this is wrong!" when something doesn't feel right—goes all the way back to the United States Constitution, in which our Founding Fathers wrote about working toward a more perfect union. Believing that we can do better and be better—and taking the action necessary to make those hopes a reality—is one of the most patriotic acts possible.

So how can you support your girl as she stands up for her beliefs? Follow these tips from Girl Scouts’ developmental psychologist, Dr. Andrea Bastiani Archibald.

Start with a discussion

If your child feels passionately about a certain issue—perhaps a safety issue, gender equality, or even something more local like improving her school’s playground—ask her why she feels that way and what she would do if she was in charge. Similarly, if she points out that something seems wrong or unfair, discuss the issue with her in an age-appropriate way. Showing kids their opinions and beliefs matter and that you really are listening to what’s important to them will help them build character and give them the courage to speak up and express their views in the future.

Talk about the “why”—even when it’s uncomfortable

Regardless of the cause she cares about most, she might wonder why the things she sees as problems were allowed to happen in the first place. Talk with her about the range of different beliefs and ideologies that have existed over time and the importance of both listening to and trying to consider things from another’s perspective (even when those perspectives can be hard to hear). Explain that not everybody is right all the time, and that even people in powerful positions make mistakes and use bad judgment from time to time. Inspire her to know change is possible by talking about the bravery and accomplishments of leaders like Malala Yousafzai and Rosa Parks.

Help her see her power

As members of society, it’s our job to tell those in charge what we believe in so they can take action. Depending on her age, you can help your daughter write a letter, call government officials, or even take part in a march or peaceful protest—making sure to explain in simple terms the impact any of those actions might have. Emphasize that it’s normal for her to feel angry and disappointed when she thinks something’s not right, and that those feelings—when expressed in a non-violent way—can motivate others to take action, too, and actually help change the world. Bonus? Rather than feeling powerless or helpless in the face of something she sees as bad, your girl will realize she has the power to be part of the solution. It feels good to take action!

Be there for her

Whether your child asks to attend a rally, protest, or march, or is addressing an emotionally charged topic through social media, talk with her ahead of time to explain what potential responses could be. If she’s going to an event, discuss what she might see, what kinds of people might be there, and what different groups might be thinking and feeling. Carrying a sign (especially one she made herself), chanting along with the group, or seeing affirming responses to her views online can help your girl find a sense of community—she’s not alone in her beliefs!—and reinforce that she has the power to make a difference. That said, being in the middle of a large, very vocal crowd can be frightening, as can receiving negative comments or hateful reactions online. Iconic advocates famously faced detractors with unflinching dignity, but some forms of opposition may be too much for a child or adolescent just finding her voice. So check in with her and keep an eye out for any signs of anxiety or fear. And of course, if you’ are concerned that your child might find herself in harm’s way, take her out of the situation immediately, then help her find another way to express her views such as writing a letter to her local newspaper or attending her local city council meeting.

Helping your child become civically engaged and stand up for what she believes in might not always be easy, but it will certainly be worthwhile. As Dr. King said in an address at the University of Chicago, “The institution of the family is decisive in determining not only if a person has the capacity to love another individual, but in the larger social sense whether he is capable of loving his fellow men collectively.” And indeed, raising up a generation of thoughtful, passionate, engaged—and yes, when called for, maladjusted children—is perhaps the most meaningful and important thing we can do for the future of our society. 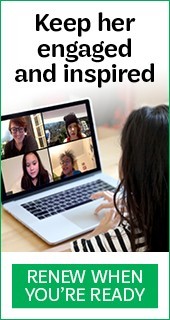