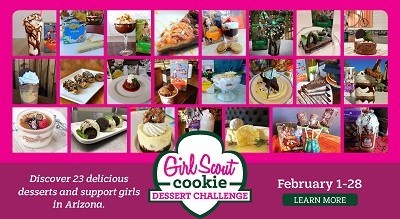 Girl Scouts–Arizona Cactus-Pine Council is pleased to announce the return of its award-winning Girl Scout Cookie Dessert Challenge. For the fifth year in a row, chefs from some of the state’s most popular restaurants will use their culinary prowess to re-imagine one of the beloved flavors of Girl Scout Cookies – Do-Si-Dos, Samoas, Tagalongs, Thin Mints, Trefoils, S’mores and Savannah Smiles – into a custom dessert menu item. Each restaurant has agreed to feature its dessert on their menu from February 1 to February 28, 2018, with a portion of the proceeds from each dessert sold directly supporting Girl Scouting in Arizona.

“While I was clearly never an actual Girl Scout, we jumped headfirst into the Dessert Challenge in year one to support girls and women in this community,” says Michael Rusconi, whose team at Rusconi’s American Kitchen in Paradise Valley area created a Samoa dessert for the first four years, and this year took on Tagalongs. “All these years later, especially now with their ‘G.I.R.L.’ mission, which is focused on fostering Go-getters, Innovators, Risk-takers, Leaders, we are doubling down on our support."

Rusconi’s American Kitchen, along with Olive + Ivy, The Thumb, and Lumberyard Brewery in Flagstaff, will be inducted into the Girl Scout’s “Five Timers Club” this year, commemorating their participation in the challenge each year since its inception in 2014.

There are also several multi-year veterans and new contenders joining in the fun for 2018 – 24 venues in total.

"I wanted to join the Challenge this year for two main reasons,” says Diego Espinoza of Fuego Grill in Tolleson. “First, I wanted to take part – and even named my dessert Jessie’s Delight – as a tribute to my mother. She is a strong female leader for our family and community, which connects with the Girl Scout mission. With her leadership and mentorship, I have become a successful business owner and AZ State Representative LD19. And second, I applaud the Girl Scouts’ outreach efforts in Hispanic communities and want to do my part to be a part of the Movement.”

All the chefs hope not only to raise critical funds to support local Girl Scouting, but also to inspire home cooks across Arizona to buy an extra box or two this Girl Scout Cookie season to create their own desserts, too. Girl Scout Cookies will be available from Jan. 22 to March 4 this year. As in recent years, the Girl Scouts will have all cookies on hand for immediate customer purchase. Locations of cookie booths can be found using the Cookie Finder app at girlscoutsaz.org/cookiefinder.

See the participating restaurants, and their creative desserts.

To share your own dessert creations – or photos of you and your family enjoying any of the chefs’ creations – simply tag your social media posts with @GSACPC and #dessertchallenge.